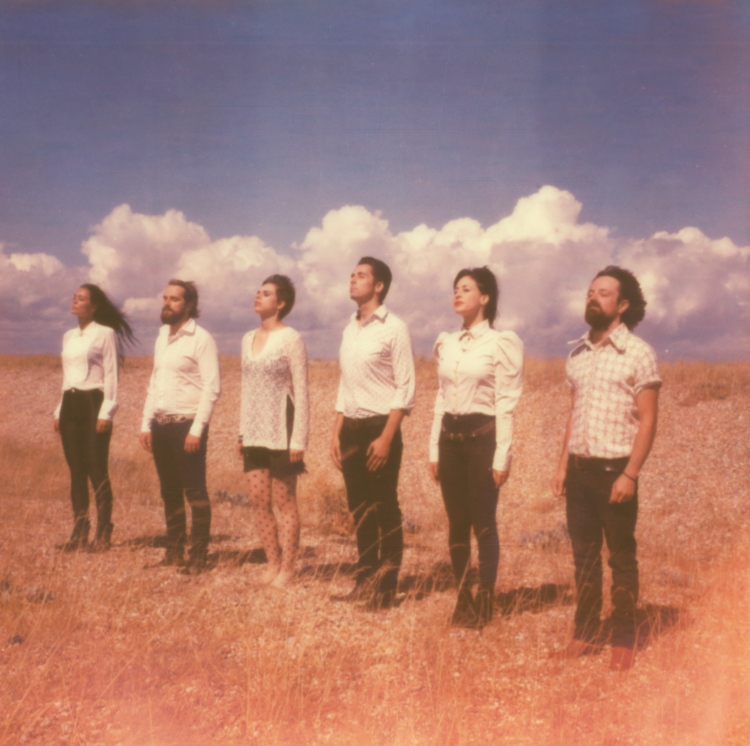 Lola Colt is a six-piece who came together in legendary London to create their psychedelic fuzzy shoegaze-influenced music. “Gun”, their infatuating singer actually moved from Denmark to London to indulge in its music scene. Highly inspired by film is not only their band name: “Lola Colt” is a 1967 Spaghetti Western, subtitled “face to face with the devil” – and facing their music, you might as well face a devil, considering the dark seducing surge of an upcoming evil, like a thunderstorm brewing up.

Early adapted and promoted by the psych label Fuzzclub Records Lola Colt found their perfect home. But Lola Colt have surely more to offer than only psych. With The Bad Seeds and Grinderman’s Jim Sclavunos as producer they put their debut album “Away From The Water” in hands not only to a big influencer and idol, but someone who embarks a congenial path in music, the panoramic soundtrack-like vibe.

Repeat magazine was lucky to meet up for a virtual chat with Lola Colt about imaginary, inspiration, films and the past and future of music.

Listening to your music comes with the feeling of being in a movie… Do you have some pictures in your mind when you are playing? What do you see?

Lola Colt: When we’re playing we’re more focused on what we’re hearing and feeling. Vision is reduced to its most basic form, to see each other and to react to each other as we play. When we’re writing music however, having imagery in mind is important – conjuring up memories of a particular person, or visions of a landscape for instance can really help you to understand your emotional response to an idea. You have to let you mind and all your senses run away to discover the deeper levels.

In an interview you once mentioned your deep connection to movies when you explained that when you started the band you were thinking it first as kind of film project. You said: “In our minds we were making cinematic soundtracks to imaginary movies”. Do you have a special connection with the film genre? Did you actually make a movie soundtrack?

LC: We do have a strong connection yes. Film is a powerful medium because it plays with combinations of your senses. Music can be powerful, but if you add to that, say, a beautiful visual element, and then some context – like a storyline – you can really play with peoples’ emotions on a deeper level.

This is why we feel live music is so important, because when you see people performing, you get an insight into who they are and the reasons for what they are doing it. You get context, and you see it exposed for what it really is. Recorded music is a harder challenge, but it is our hope that by considering these other dimensions when writing music we will be able help people see their own story when they lie back with their headphones on and eyes shut.

What directors/movies would match your music in your opinion? For whom would you like to compose a soundtrack?

LC: There often seem to be references to Quentin Tarantino, David Lynch when people write about us. Working with people like that would be incredible, but our style is restless, we move and evolve quickly and constantly and that makes it hard to pick a specific person or film. We would rather meet someone whose journey through time and art has put us in a place where we make sense to each other in that moment. Someone with an idea that we react to, or that is reacting to something we are doing.

“You use your senses to see the world, you draw what you see into you – through you mind, your unique being which is the culmination of all the people you’ve known, places you’ve been, situations you’ve faced, emotions you’ve felt – you filter it through your mind and push it back out into the world in a new form.

It doesn’t matter what instruments/paint brushes you use, you have colours that are unique to you alone, and when you pull on these things to create something, it will always be new.”

As an inspiration for writing songs Gun once said, it is the feeling of not belonging to anywhere. Is it so, that you feel alienated in the contemporary culture? Does it feel the same in the contemporary music scene? Would you prefer to live in the past?

LC: No I definitely don’t want to live in the past, I love the uncertainty that the future holds. The most exciting thing about being alive is not knowing what shape the future will take. It’s the same with music – learn from the past, look to the future and feel it in the now.

It’s a symptom of the contemporary music scene that if you don’t play experimental electronic music, there is nothing new that you can do, nothing new anymore to invent. How do you manage it, to not get dragged down by this development?

LC: I don’t believe this is true. To create music or art of any kind, you need to look to yourself and your own personal experiences in order to be original. You use your senses to see the world, you draw what you see into you – through you mind, your unique being which is the culmination of all the people you’ve known, places you’ve been, situations you’ve faced, emotions you’ve felt – you filter it through your mind and push it back out into the world in a new form. If you do this then it doesn’t matter what instruments/paint brushes you use, you have colours that are unique to you alone, and when you pull on these things to create something, it will always be new.

LC: Of course, it doesn’t matter that it sounds new, or that it is experimental – what matters is if people are reacting to the world around them in interesting and genuine ways.

As comparing the music creation process, the composing and putting together songs with the others to recording them finally and to playing them live, what does bring you the most pleasure?

LC: When we record a song, we have our eyes on how it could sound live. For us everything is driven by the live moment as a connection with people. It feels great to share these moments.

The album !Away From They Water” will be released on oct 27th on Fuzzclub Records. Pre-order on http://www.lolacolt.com.